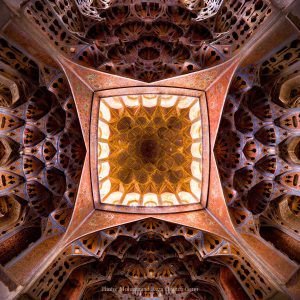 this shows the plaster ceiling of the music room of Aliqapu palace,

Aliqapu, meaning grand doorway in Azeri language, is the name of a palace located in western edge of Naghsh-e-jahan square in Isfahan city, built during Shaah Abbas I of Safavid.
There is a hall in the last floor of this 6 floor palace called “the music hall”. This hall takes its name for the peculiar Stucco shaped as porcelain jars in its ceiling which produces a strong echo and reflection of sounds in the hall resulting in a louder music in the palace.

Everything is red in this hall,the ceiling,ground and walls.
It’s unique and glorious repetitive stucco ornaments and it’s special architecture style,left me no choice but to stare at the ceiling and try to photograph it as best as I can.
The Stucco and ornamentations of this hall have a strong resemblance to those of Sheikh Safieddin’s house.
For shooting this photo I was standing exactly in the middle of the music hall and took the photo from above of my head with a wide angle lens.