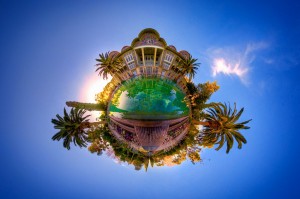 Eram Gardens in Shiraz is one of the most famous historical gardens in Iran. These gardens and the building within them were built in the middle of the 13th century, but were renovated and enhanced significantly during the Qajar dynasty. Eram owes its fame and importance to the botanical garden which is home to a verity of unique and rare plants. The main building in the gardens was built by Nasir-ol-Molk, the creator of The Pink Mosque and is ornamented by numerous inscriptions and alluring paintings.

As I walked into the gardens, the first thing I noticed was the positive energy emanating from the place due to its green and colourful surroundings; much like that of the Nasir-ol-Molk Mosque. If not only for the agriculture, the grand structure before me had me in awe, from the vast colours and patterns used, to the unique architecture. More striking was the lake that span into small streams used as a watering system for all the gardens.
I tried to find a way to capture the building and its surrounding trees, and their reflection in the lake. In order to enhance the light and colour of the scene, I took the photo during sunset.