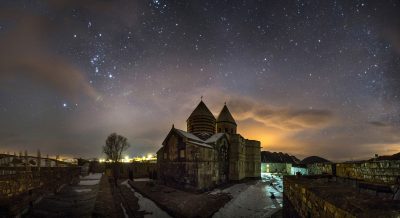 St. Thaddeus Monastery is located in North West of Iran, near the city of Makoo. It is also known as Black Monastery due to the application of black stones for the building.
This monument dates back to the early years of Christianity, and is built over the tomb of St. Thaddeus –one of the early messengers of Christianity. This place is recognized as the first cathedral of Christianity, however, it has still retained its status as a monastery. As of today, in the mid-summer on the anniversary of St. Thaddeus murder, Armenian people come to this place from all over the world for religious rituals.

This Monastery is the most important historical and religious building for non-Muslims in Iran; therefore I always wanted to take a photograph worthy of its title, in order to add it to my collection of historical places in Iran. After obtaining the necessary permits in order to photograph it at night I was able to capture it on a very cold winter night, where other than the small room in which the guards stayed, there was no light. I took this photo as a panorama, from the Monastery and the many facets of the winter sky.